24 Things you don't know about the Hollywood Icon.

1.  Monroe's birth certificate from 1926 lists her birth name as Norma Jeane Mortenson. The last name was a misspelling of the surname of her mother's second husband, who separated from Gladys before she became pregnant. Later reverted to her first married name, Baker, and gave that name to her daughter.

2.  Gladys later told Norma Jeane that her father was Gladys' boss, Charles Gifford, who looked like Clark Gable in the snapshot that Gladys showed her.

3.  Gladys Baker was a film cutter at Consolidated Film Industries. Believing herself to be incapable of raising the child, she left Norma Jeane with various foster families.

4.  When Norma Jeane was seven, Gladys bought a house and brought the girl to live with her. Within a few months, the mother suffered a nervous breakdown and was institutionalized.

5.  Gladys had a history of suicidal depression in her family. Her brother and grandmother had killed themselves.

6.  In her memoir, Monroe claimed she had been sexually abused by several different people during her years in foster care. Ervin "Doc" Goddard, the man Grace McKee married also raped Monroe.

7.  In 1942, when Monroe was 16, Doc Goddard got a job in West Virginia. He and McKee were unable to take her. Rather than let her become a ward of the state, they arranged for her to marry a neighbour, James Dougherty.

8.  During World War II, while James Dougherty was serving in the Merchant Marine, his wife was working in the Radioplane factory in Van Nuys,

9.  The official story of Norma Jeane Dougherty's discovery by Monroe's estate, had her walking down Sunset Boulevard when the 18-year-old was spotted by photographer Bruno Bernard, who gave her his business card and offered to take some test shots.

10.  Ronald Reagan actor and future president was a captain in the Army's 1st Motion Picture Unit, doing publicity work. He ordered photographer David Conover to visit the Radioplane factory to shoot pictures of girls contributing to the war effort. He was particularly struck by the beauty of Norma Jeane Dougherty.

11.  20th Century-Fox talent scout Ben Lyon, who had seen Norma Jeane Dougherty's pin-ups and signed her to the studio, is credited with coming up with the stage name, whose "MM" alliteration he thought would be good luck, Marilyn Monroe.

13.  Monroe filed for divorce from her first husband in 1946, while he was still overseas.

14.  A decade later, at the height of her stardom, Dougherty claimed in a magazine interview that she threatened to kill herself by jumping off the Santa Monica Pier if he left her. Her version of the story was that she'd threatened suicide out of boredom.

15.  People were surprised when Monroe, who had been married for nine months to Yankees legend Joe DiMaggio, married the intellectual Miller.

16.  "Bus Stop" director Joshua Logan was impressed with Monroe to recall later that working with her was "the first time I learned that intelligence and, brilliance, have nothing to do with education." 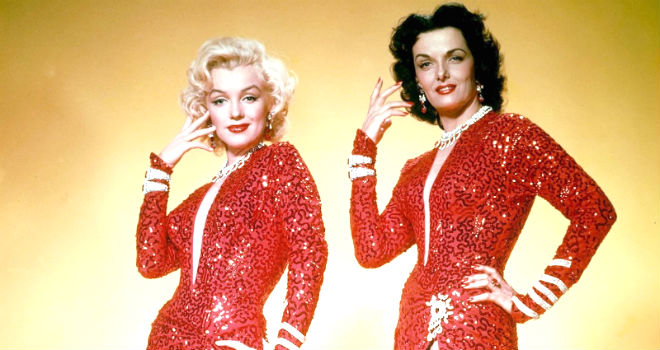 17.  "Gentlemen Prefer Blondes" co-star Jane Russell tried to proselytize Monroe. Monroe later joked, "Jane tried to convert me, and I tried to introduce her to Freud."

18.  Tommy Hilfiger bought her jeans from "River of No Return" at an auction for $37,000. He gave them as a gift to Britney Spears.

19.  The glittering Jean Louis gown she wore during her rendition of "Happy Birthday, Mr. President" on John F. Kennedy's birthday, In 1999, it was sold at auction for $1.3 million.

20.  Monroe was infamous in Hollywood for being late to movie sets and struggling with her lines.

21.  "Some Like It Hot" co-star Jack Lemmon recalled later that nothing seemed to help Monroe remember her lines. He also recalled, that no matter what she was saying, the camera would capture a sparkling performance that the human eye had missed. She knew better than anyone how to act for the camera.

22.  When Monroe's co-star Clark Gable suffered a fatal heart attack at age 59 and died, Monroe blamed herself. With the loss of Gable and the dissolution of her marriage to Miller, Monroe became so despondent that she nearly jumped out the 13th-story window of her Manhattan apartment in early 1961.

23.  Alarmed by her depression, her psychiatrist committed her to the Hospital. She called ex-DiMaggio and begged him to come to spring her, which he did. The two rekindled their relationship, even planning to remarry until her fatal overdose, a few days before the August 1962 wedding date.

24.  Monroe's estate continues to use her image to work marketing magic.